PARCEO was so pleased to work with The Muslim Consultative Network’s summer youth program, MY NYC In Action as they planned their press conference and insured that their powerful and important voices could and would be heard! We look forward to our continued partnership with them.

MY NYC In Action’s Press Release:

Today, on August 14th, Muslim students held a  press conference to make their voices heard about Islamophobia and how it impacts young people. According to Ahlam Almoflihi, one of the organizers: “We are here because Islamophobia has been a big issue for us. We want our voices heard, not the distorted views of us we see too often in the media.” 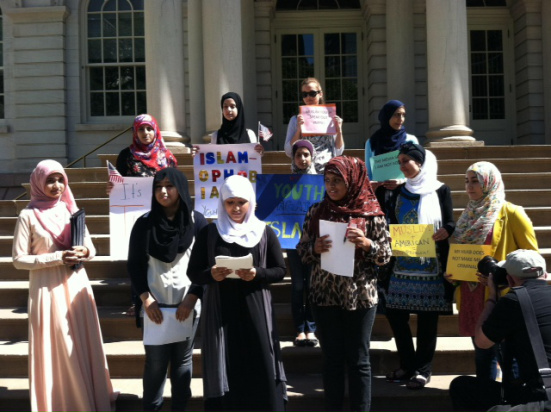 Namia Sulaiman, a high school student and another one of the organizers, said that Muslim youth experience Islamophobia in many ways, including at school.  “We want our school cultures to be respectful of who we are and not promote stereotypes, and they should not ignore bullying when it happens,” Sulaiman said.

“We are going to share our own stories and experiences,” said another organizer, Shaba Ahmed, who emphasized that young people are being affected by Islamophobia on a regular basis.  “I was getting on the subway when my metro card wasn’t working.  I asked an MTA employee to let me in, and he said, you’re Muslim why should I help you?”

The students are calling for their voices to be heard and to be treated with the dignity they deserve.

The press conference, organized by Muslim youth, is sponsored by the Muslim Consultative Network’s summer youth program, MY NYC In Action, and was held on the steps of City Hall at 11 AM.